Almost all human beings acquire a language (and sometimes more than one), to the level of native competency, before age 5. That is because we are all born with an innate biological ability for understanding the principles of organization common to all languages. Furthermore, according to research performed at the University of Washington, language has a critical period of learning. Babies and children are linguistic geniuses until they turn 7 where there is a systematic decline. The graph shown below is indisputable by scientists but there is no common explanation of this phenomena. 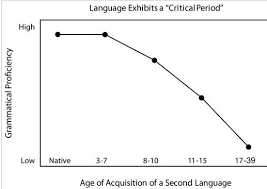 Source: Patricia Kuhl, co-director of the Institute for Brain and Learning Sciences at the University of Washington